Home » CLL Information & Management » Treatment & Research » Medications » Immunotherapy » Bispecific Antibodies: what are they and are they the future of treatment for CLL (chronic lymphocytic leukemia)?

Bispecific Antibodies: what are they and are they the future of treatment for CLL (chronic lymphocytic leukemia)?

Chronic lymphocytic leukemia therapy has rapidly advanced, improving life expectancy in the last decade with a move away from the nonspecific destruction of chemotherapy towards the more targeted oral therapies that block the pathways critical to the cancer cell’s survival, or push it toward apoptosis or programmed cell death.

The first game-changer in treating CLL was not the targeted therapy, ibrutinib. Years before ibrutinib came rituximab (R), a monoclonal antibody, a type of targeted immune therapy that improves almost all other cancer killers when added to the treatment cocktail. Think about the R in FCR. Adding the antibody R to the chemo combo of F (fludarabine) and C (cyclophosphamide) dramatically improved outcomes and gave us the very first treatment that was proven in a well-designed clinical trial to prolong life in CLL.

An antibody is a very special blood protein made by plasma cells, a type of B lymphocyte. Antibodies are produced in response to and to counteract a specific antigen. An antigen is something that is perceived as a threat such as a toxin, a virus, a bacterium, a cancer or other foreign substance which induces an immune response. Antibodies are a critical piece of our immune system and are what we hope to see after we recover from an infection or are vaccinated, so that we don’t get sick again with the same illness.

Special cells “present” antigen to T cells to get them to do the dirty work of killing off the threat. 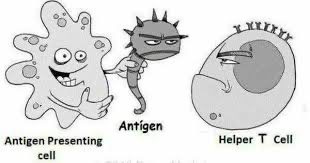 But getting back to cancer in general, and CLL in particular: our T cells are exhausted. We will revisit this later in our story.

First let’s explain rituximab and other monoclonal antibodies, or MABs, and their role in fighting cancer.

A monoclonal antibody, or MAB, is an antibody produced by a clone of cells that are all identical. The presence of monoclonal antibodies in the blood can be a sign of a dangerous cancerous clone, as is the case in multiple myeloma. But when they are man-made and directed against a cancer, they are helpful targeted killers or are capable of aiding and abetting other treatments in the mass murder of the cancerous clone.

Monoclonal antibodies are tricky to manufacture, usually grown in mice or in cell cultures. For cancer treatment, they all bind to the same place or epitope on the surface of a cell. For example, rituximab, ofatumumab, and obinutuzumab all bind to different epitopes on the same cell marker, CD20, that is found exclusively on B cells, normal or cancerous. These MABs just don’t see other cells. They mark their targeted cell as abnormal and help identify or present them for destruction, or in some case destroy them by themselves. If all works out, millions and millions of CLL and normal B cells are killed.

The problem is that in CLL, the immune system is incompetent and our T cells have this “exhausted” profile and don’t always respond properly to the alerting signals, and they can allow some of the cancer to escape destruction.

So along comes the bispecific antibody, or BsAb. These clever man-made antibodies, as the name suggests, exploit the Y shape of the antibodies.  The assemblage has two different antibodies with two different targets, one found on the cancer cell and the other, typically CD3, a surface marker found on those lazy T cells. This combo links the two cells in a communal death hug for the cancer cell as it makes it easy for even an exhausted T cell to do its duty. When you think about it, this is very similar to what successful CAR-T therapy is about. In our fun CAR-T cartoon flipbook, we explain how CAR-T cells are genetically re-engineered to recognize and kill the cancer. CAR-T cells don’t need to be “presented” to the antigen. They are already pumped, primed and targeted, all ready to go on their own.

BsAb therapy is different than CAR-T as it isn’t a cellular therapy, but “humoral”, using an intravenous liquid approach to push the immune system and lazy T cells back into action. Since it’s “off the shelf” and not specific to each patient, it has potential advantages over CAR-T in treating blood cancers.

I say potential, as there are no bispecific antibodies approved or even being actively developed in CLL, but as their efficacy in related B cell lymphomas is increasingly demonstrated, more CLL trials are sure to come.

Given the success of MABs and CAR-T, many CLL researchers believe that BsAbs will be a vital piece of CLL management in the near future. Only further research will see if they are right.

Immune therapy is a big piece of solving the puzzle of a CLL cure, and I believe bispecific antibodies may be a helpful puzzle piece. Stay strong, we are all in this together.

Dr. Brian Koffman, a well-known retired doctor, educator, and clinical professor turned patient has dedicated himself to teaching and helping the CLL community since his diagnosis in 2005. He serves as the Executive Vice President and Chief Medical Officer of the CLL Society Inc.