Home » Living With CLL » Stories and Testimonials » How I See It

How I See It 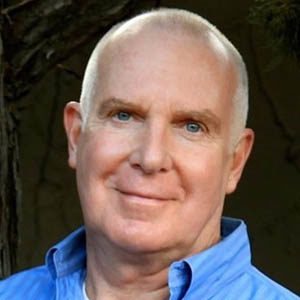 During the decades I worked in hospice and palliative care, my husband Jim and I simultaneously lost a landscape of friends and acquaintances to AIDS.  During this uncommon exposure to grief and loss I would, every so often, repaint rooms in our home, heeding some call or need. I’d get a new color in my head and obsess over it until it was on the walls.  Creating a new visual environment was calming, a visually pleasurable change I could control in the face of so much cellular and emotional chaos.  Fortunately, Jim understood the connection and would help move the furniture.

I stopped painting rooms when I retired in 2007 and began painting canvases.  I’d expected to be painting large expressive landscapes, similar to those we collected, but what spontaneously emerged were precise-edged compositions, mostly of squares, classic symbols of stability. It was as if some internal gyroscope was still attempting to reckon with the various forms of disruption I’d previously experienced.  “Let’s put some right angles on all that.”

As this ordered vocabulary grew, I arranged these inert symbols into energetic compositions, using color to illustrate interactive narratives and shadows to imply an external light source and depth.  The goal in each of these paintings was a feeling of balance, but more the quiet equipoise of Japanese ikebana than the symmetry of Greek temples. As time went on, I wondered how to further infuse these abstract images with vitality, so I decided to change the medium and substrate.  I digitized the first image above, turned it black and white, repeated the pattern and arranged the resulting squares into a landscape format.  After adding color back in and having it printed on silk, I quickly saw the potential for a new series, Art to Wear.  I have enjoyed seeing these abstract patterns, unchanging on canvas, become dynamic on silk as they are wrapped, folded, or caught by the wind. Since then, I’ve explored other series, but from time to time I return to the squares, eager to see what they have to say. Most recently, while living with “cancer of the immune system” in the middle of the pandemic, I have been hungry for their balance and meditative calm. Following 2 years of service as a Peace Corps Volunteer in rural Nepal, True Ryndes embarked on a 35 year career in hospice and palliative care.  In 2007 he was awarded the Hospice Founders Award by the National Hospice and Palliative Care Organization.  He now writes and paints in San Diego.
www.trueryndes.com | [email protected]